"An appointed Supreme Court instead of an elected court sounds excellent in theory. Involving both the executive and legislative branches in choosing the justices maintains a balance of power between the three branches. However, instead of neutrally calling balls and strikes, just focused on the law, the Supreme Court's political leanings have often fluctuated wildly, greatly diverging from the general public’s.

Those who oppose a popular vote to elect Justices will insinuate elections will politicize the court, without acknowledging the Supreme Court has always been politicized. A popular vote will introduce accountability and diversify the court, more accurately reflecting the values and needs of the American people." -  William Plank

Designed to be Unaccountable

Imagine this timeline. 232 years ago, the US Constitution was designed at the tail end of feudalism, which still existed in 1787. At that time, the norm in European based cultures was for monarchs, inherited nobility, landed white males and churches, all controlled by men, to control nearly all the wealth and power. When Madison designed US government institutions and the glue that held his design in place, elections, he deliberately insulated and protected a small ruling class, his cohort of slavers and other wealthy landowners, from largely illiterate, landless peasants. Just as practiced in medieval England 232 years before, Madison, with the approval and support of other slavers, excluded everyone on the lowest socio-economic rungs of society, the peasants of 1787, all women, slaves, Native Americans, landless men, indentured servants, from the decision making process. He  marginalized the vast majority of people in the US from having any power or say in how our government conducted itself. All of the people who may not have liked what the slavers did were excluded from decision making from the start.

Madison was a third generation Virginia slaver who owned approximately 120 slaves. 39% of Virginia’s population were slaves.  To Madison and his contemporaries, owning and accumulating slaves was a legitimate business model, a good way to become wealthy. It didn't matter that it was through the worst, most onerous, deadly form of capitalism ever invented. After Somerset v. Stewart abolished slavery in England, Madison designed a comprehensive system to protect oligarchs and preserve slavery for another 93 years. Parts of his design have been modified, but the basic structure is still in place.

He disguised it as a democracy. The slavers wrapped the new government in Liberty and Freedom while enslaving 18% of the population. The new system protected their estates, facilitated their continued concentration of wealth and kept them in control. Meet the new boss, same as the old boss. 4 of the first 5 Presidents, including Madison, were Virginia slavers. For 32 of the first 36 years after the Constitution was enacted, through the office of the Presidency, Virginia slavers controlled the Supreme Court. Slavers eliminated inherited aristocracy in name, but retained the social and economic structures behind the nobility's titles. From the beginning, institutionalized obstructions designed into law, protected by the Courts, prevented the majority of the population from sharing power, changing the law, abolishing slavery or holding elected officials and judges accountable.

• 94% voter exclusion: only white male landowners over the age of 25 - at a time when the average life expectancy was 34.5, could vote.

• The US Senate was elected by the state legislatures, also selected by land owning males in each state. This exclusion was loosened until 1917 when direct election of the Senate was implemented. Women finally got the vote in 1920.

• Presidential elections were skewed to favor slave states with use of the Electoral College and the so called three-fifths compromise until 1860. 10 of the first 12 Presidents were slavers.

• Slave owning Presidents selected slave owning Supreme Court Justices. Those Justices were confirmed by representatives (US Senators), not directly elected by or accountable to the majority of the population.

• Madison designed only a few ways to change the court: through death, resignation or impeachment. As far as I know, none of the justices have ever been impeached. Kavanaugh will never see impeachment for being a sexual predator.

If you look at the most extreme examples of tyrants in history, recent history from the 20th C., Stalin, Hitler and Mao, dictators who murdered more people than anyone else, or lessor tyrants like Pol Pot or Ratko Mladic,  the precondition to their tyranny, was authoritarian rule. Their tyrany was enabled by concentration of power and a complete lack of accountability. The remedy to concentration of power and lack of accountability is to disperse power and make everyone accountable for what they do.

The arc of history is toward greater inclusiveness, accountability, sometimes even more transparency. At the same time, slaver institutions, archaic leftovers from the 18th Century, have kept in place non-representative, unaccountable institutions such as the Presidency, the US Senate and the US Supreme Court. With Article V of the Constitution, Madison made everything he did extremely difficult to change. The Supreme Court appointment process and lifetime tenures haven't changed since 1787. We're living with a slaver designed system in the 21st Century that concentrates power and makes people who are not gods, aka Supreme Court Justices, almost completely unaccountable.

The Supreme Court, the Presidency and the Senate, all intertwined in the Supreme Court Justice appointment process, are the three least democratic, most unaccountable branches of the US Government. The House of Representatives, the most representative and most accountable of the four institutions, is completely removed from the Supreme Court Justice appointment process. Both the Presidency with the Electoral College, and the Senate, with Senators appointed by state legislatures until 1917, were designed by Madison to be removed from direct accountability. The Supreme Court was designed to be twice removed, selected by people not directly elected by the people. This was for our own good you see, to guarantee the independence of the court, not promoted as a reactionary force to prevent change.

Every generation the Supremes have made horrible political decisions taking the country in a terrible direction. Insulated by anything other than impeachment from accountability, which never happens, they've made decisions like Dred Scott (contributing to the Civil War), Plessy v. Ferguson (legitimizing Jim Crow), Buckley v. Valeo (equating money to free speech) and Citizens United (unleashing tons of dark money into election campaigns).

Local and state governments have historically been the laboratories of democracy. Most states have gone a different direction from the federal government, introducing accountability into their state supreme courts. "Thirty-eight states hold elections to select the members of their courts of final appeal." We should adopt the states lead on democratizing and introducing accountability into most state courts, by introducing national accountability and democracy to the US Supreme Court. With an amendment to the Constitution, we could finally elect the least accountable branch of government, using STV elections.

Let's introduce democracy and accountability to the US Supreme Court

• Sync elections every 4 years for US Supreme Court Justices to elections held in mid-term Presidential cycles.

• Disperse power by enlarging the court to 28 elected Justices.

• Each President would have (1) 4 year pick to be confirmed by 60% of the House of Representatives, not the Senate. That pick will in effect, be a Centrist tie-breaker. Outliers on the left and right wouldn’t be able to achieve 60% approval.

• Introduce a farm system of a pool of qualified candidates to the US Supreme Court. Supreme Court candidates should be vetted by a minimum of 5 years experience and legal rulings at Appeals Court and State Supreme Courts.

• Apply the same ethics provisions applicable to members of the US Congress to all members of the federal judiciary. Stiffen disclosure laws. Require release of annual tax returns while in office, and 5 previous years of tax returns for candidates.

Note that not all territories are technically shown on the map, as some of them are tiny islands in the Atlantic or Pacific Ocean, but their official population count is still included in the map.

The Supreme Court was designed by Madison to be completely unaccountable to the electorate. 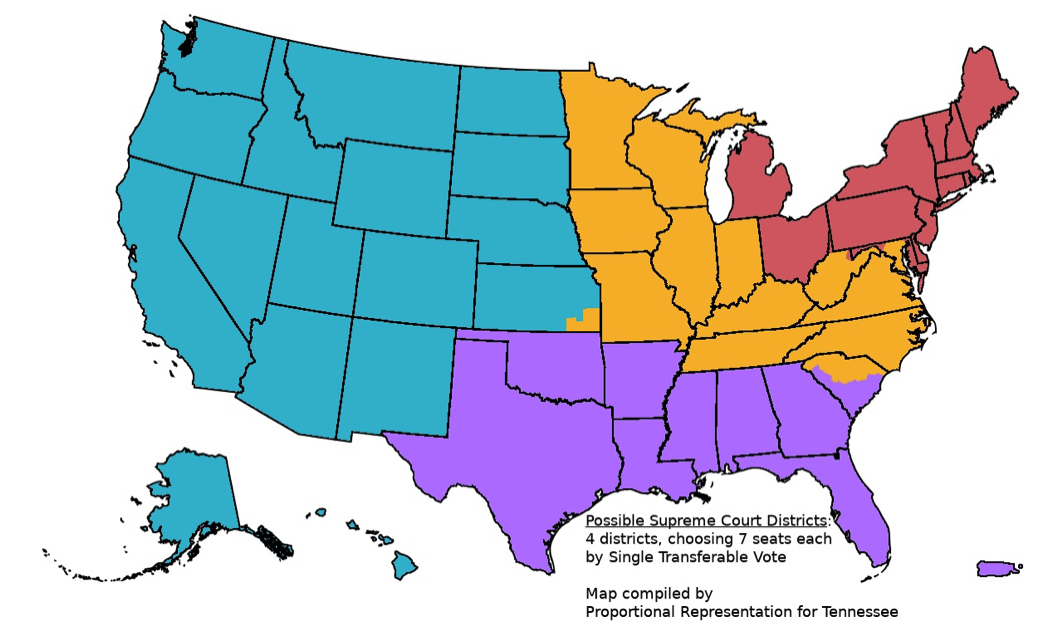 A sample configuration resulting in a Supreme Court designed for accountability to the electorate. See *Map Details below. 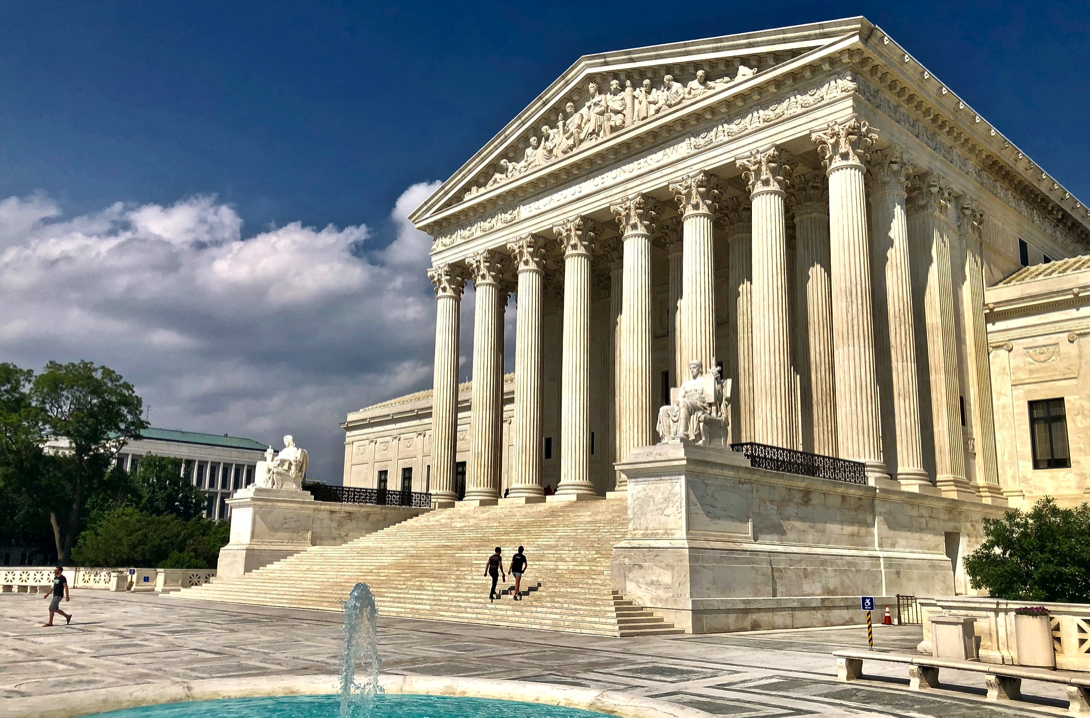