This formula should enable the realization of Finer Grain Single Transferable Vote (STV) systems, not quite as Fine Grain as European systems. United States representation is far more concentrated in fewer members in legislative bodies than Europe. Boulder County, CO (pop. 322,514) has 3 County Commissioners from one party since 1994. Iceland (pop. 355,620) has 63 MPs from 7 parties.

STV more accurately reflects and represents different groups of voters. Even greater accuracy of demographic and geographic representation can be achieved by adding more members. STV can be applied and scaled to fit any city, county or state. It is not a one size fits all formula. Systems need to be flexible and adjusted for each community's need.

5% grain representation similar to New Zealand's MMP system can be realized with a 2.33X increase from 9 to 21 seats.

In much the same way we don't need to know Electrical Engineering to use a smart phone, it's not necessary to dwell on the mechanics of STV vote counting to vote for our favorite candidates. It's an easy enough system to use, but the STV vote counting can be confusing. Opponents of Pro Rep in British Columbia exploited confusion and used FUD to scare voters and preserve FPTP. The "What is STV?" video describes the Hare Quota system, one of the simplest to explain.

The more members there are of a legislative body, the more accurately a full spectrum of the electorate can be represented, the more power is dispersed. Most systems in the US are designed to concentrate power in very few people from one or two parties.

Current legislative bodies can be kept the same size with STV applied to the current number of members. 7 or 9 seat councils in either districts/wards, a combination of wards and At Large, or At Large alone, can still be kept at 7 or 9 seats, with all seats selected by STV protocols from a single district.

Including districts guarantees distributed geographic representation. An increase of council size from 7 members in wards or At Large to 15 from two districts or from 9 to 21 members from three districts may be a difficult sell. Breaking out council size and districting as a separate initiative question from the electoral system, will make each easier to accomplish; also to comply with city and county charter requirements.

• Multiply by 2.33 the current legislative body. This makes any council/commission/house finer grain and sets up larger Multi Member Districts.

• Round up or down to the next odd number.

• Divide the result by 7 (seats per district). This equals the number of districts.

• If there are extra seats after the division by 7, those seats become Adjustment Seats.

- The adjustment seat(s) would derive from the runner up pool in all the districts.

• The runner up pool would be available for adjustment seats and vacancies: in place of leaving seats vacant, in place of elitist, insider appointment committees, without incurring the cost of special elections.

• Voters can rank their vote for as few or as many candidates as they want.

- Fewer rankings with a large field of candidates could exhaust a ballot before all 7 seats are filled.

• The candidate(s) receiving #1 ranks from 14%+ of the district would be elected in the first round.

• Using Single Transferable Vote (STV), votes over the quota would be redistributed, then last place candidates eliminated with their votes going to second choices per STV protocols. This is repeated until all 7 seats are filled.

• Council/Commission/House elects its own Mayor, Board Chair or Supreme Leader.

25 seats in 3 Districts of 7 seats each, 4 Adjustment seats.

25 seats = Every 4% demographic represented, the same as Norway and Sweden.

28 seats in 4 Districts of 7 seats each, 3 Adjustment seats.

Why not Ranked Choice Voting?

If there's something old, moldy and stinky in your fridge, do you keep it and try to make it into a new dish, or do you move it into the compost pail?

At first glance, STV looks the same as what is called RCV. In both STV and IRV/RCV systems voters rank their favorite and least favorite candidates the same way. The huge differences between STV and IRV/RCV are the number of members per district and counting techniques. IRV in Single Member Districts is not proportional, STV in Multi Member Districts is proportional.

• IRV/RCV misidentifies as the highest priority and solves only one issue: the Spoiler Effect.

• Changing from FPTP to IRV/RCV is a modification of Single Member Districts, it's still Winner Take All.

• IRV/RCV prolongs the delusion that Single Member Districts are a real democracy.

• IRV/RCV doesn't solve nearly as many issues solved by all Pro Rep systems.

• IRV/RCV transfers from losing candidates only, may waste as many as 49.99% of the votes.

• There is no history of IRV/RCV becoming a steppingstone to full proportionality.

• Maintains many of the same barriers to entry for candidates, limiting voter choice.

• STV outcomes represent the full spectrum of diversity in the community.

• STV demands compromise in a legislature.

• STV transfers from both winning and losing candidates with very few wasted votes.

• With more candidates, STV voters have more choice and accountability.

• STV is a scalable system for any size geography and population.

• In a 21 member STV system, about 95% of voters have one of their first three picks elected.

Both systems could be implemented. Why expend the effort and money implementing IRV/RCV, an inferior solution that introduces new problems?

We've been brainwashed when thinking about elections into stressing the importance of land and geography, not people. Everyone should be represented equally. One person should equal one vote. Every vote should be treated equally regardless of where the voter lives. No one should be over-represented because they've been born into or chosen to live in a rural area. This was an idea forced on the North in 1787 by slavers who wanted disproportionate power. Now the people who benefit from distorted power arrangements, exemplified by the US Senate and Electoral College, won't give it up. There have been over 700 attempts. Jim Crow and women's struggle for equal rights teach us that people who have unfair amounts of power will not give it up voluntarily; it has to be taken away from them.

Nowhere is this more exaggerated than Wyoming, population 579,315. 31 cities in the United States have more people than Wyoming. None have two US Senators. The people of Wyoming, Vermont, Alaska, North and South Dakota, Deleware and Montana have disproportionate weight in the Senate and Electoral College because of slavery. Most are OK with that.

Let's start with what Wyoming got right. The Wyoming legislature has a 60 member House and 30 member Senate. With a 90 member legislature, they didn't concentrate power in 5 county commissioners like El Paso County, CO with a population 699,232.

Wyoming has failed at representing minorities and preserving voter intent. Total representation for the Wyoming House and Senate are Republicans 78 of 90 seats (86.67%); Democrats are 12 of 90 (13.33%). In the 2018 US Senate election, Rep. John Barrasso received 136,210 votes (67%), Dem. Gary Trauner received 61,227 (31%) of 203,420 valid votes cast. If you divide the 86.67% representation by Republicans in the legislative by the 67% received by John Barrasso in the statewide US Senate race = +29.6% greater Republican representation in the Wyoming State Legislature than party votes in the US Senate race. +29.6% is a significant distortion of voter intent.

When you look at 2018 county results, many county level seats were uncontested because those elections were so predetermined. For example, only once in the past 71 years, since 1948, has Hot Springs County, WY voted Democratic in a Presidential election. 6 of 8 races for county office were uncontested in 2018. This is true all across rural America, predetermined races, uncontested elections, little to no choice for voters.

Is One Party Government with predetermined, uncontested elections a democracy?

The majority of people in Wyoming and other states do not live in a democracy at the state and local level. Most of their elections are in predetermined districts predictable by party registration. Distortions in representation and uncontested elections are the direct result of FPTP in Single Member Districts.

Mixed Member Proportional (MMP) would work even better than STV where partisan elections are permitted, like Wyoming.

History of STV use in the United States.

The Forgotten History of Single Transferable Vote in the United States by Douglas J. Amy.

Election systems in the US have been conflated with Majority Rule. Representation should be broken out as a separate issue from majority decision making. In Single Transferable Vote (STV) systems, everyone gets a seat at the table when decisions are made. Minorities within any electorate excluded by Single Member District systems like First Past the Post (FPTP and RCV), are included in STV systems. Using STV, voters rank their choice of candidates on the ballot instead of voting for just one candidate. STV is the least party centric form of Pro Rep.

• Eliminates the need for caucuses and primaries. Saves taxpayer money and shortens the election process.

• Every demographic is represented.

• With multiple districts, guarantees geographic distribution while representing the diversity of the electorate in each district.

• STV has been or is currently used in Ireland, Australia and Malta, many US cities (Ashtabula, OH, Boulder, CO) and Cambridge, Massachusetts.

• STV is also appropriate for non-partisan offices such as County Coroner and Judges. 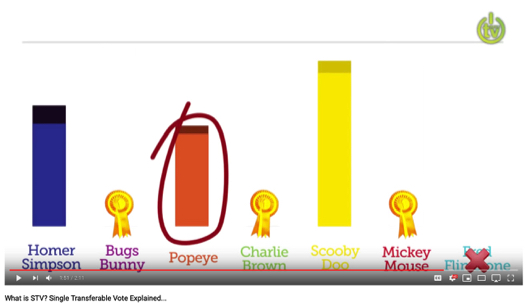 This "What is STV?" video explains in 2 minutes and 12 seconds how Single Transferable Vote counts votes and allocates seats.