The Senate was designed by slavers, to benefit slavers, to make the abolition of slavery impossible. James Madison was a third generation slaver who owned 121 slaves. He designed the Senate to obstruct the People's House. It concentrated power, and allowed an elite group of Predatory Capitalists, enriching themselves through slavery, to control government. The process of election and distortions in representation freed them of accountability to common peasants. It worked! Self enrichment through slavery was preserved for 93 years after it was abolished in England and Wales in 1772.

When Abraham Lincoln was elected in 1860, slavers comprised 1.26% of the US population, 393,975 mostly white men. When they lost control of the US government they revolted, rather than agree to peaceful democratic reform. They had contolled every Presidency since the founding of the country, for all but 8 years. They were Predatory Capitalists, and instilled a system of Predatory Capitalism in the United States culture and governance.

Control has always been more important to predatory capitalists. Democracy through cooperative power sharing is a sham. Nothing changed after slavers lost control in 1860 to the institutional design of the Senate. Slaver design of the Senate and the Electoral College survived the Civil War. Madison's design and value system persist. When you watch Mitch McConnell in action, a descendant of slavers, his attitude is the same as his ancestors. Mitch McConnell doesn't believe in the concepts of power sharing, fairness or collaborative democracy. He believes in 100% control. Under the guidance of Mitch McConnell, the United States Senate has evolved into the Worst Deliberative Body in the World.

His means to control are through distortions in representation, concentrated power through legislative levers and election design.

Distortions in representation and power from Jacobin.

• Since a majority of Americans now live in just nine states, they wind up with just eighteen votes while the minority holds eighty-two, a ratio of better than four to one.

• Thanks to the Senate’s bizarre filibuster rules, forty-one senators representing less than 11 percent of the population can prevent any bill from even coming to a vote.

• Thanks to the requirement that proposed constitutional amendments be approved by at least two-thirds of each house, thirty-four senators from states representing just 5 percent of the population can veto any constitutional change, no matter how minor.

• The same goes for treaties, which also require two-thirds approval.

• The Senate “hold” system is even more unjust. It allows a single senator representing as little as one citizen in a thousand to stall a bill or executive appointment almost indefinitely.

• 31 cities with a higher population than Wyoming do NOT have two US Senators.

• Washington D.C. with a higher population than Wyoming has zero representation in the Senate.

The problems with the 1) the US Senate, 2) the Electoral College, 3) the Presidency and 4) the Supreme Court are all rooted in the same common issues:

• "Concentration of Power", the flip side of the coin being "Exclusion of the Majority" from decision making.

• A nearly complete lack of accountability by people in office to the electorate.

• Distortions in the appointment/election process.

The cure for concentrated power is dispersed power.

The cure for exclusion is inclusion.

The cure for distortions in vote counting are systems designed to include every vote in outcomes and retain voter intent throughout the vote counting process.

The Senate is redundant of the House and unnecessary. The best remedy would be to just abolish it.

• Change Congress to a unicameral legislature.

Assuming Abolishing the Senate is too high a hurdle, how can it be reformed to introduce democracy, dispersed power, accountability and remove some of the distortions in the appointment/election process that results in someone like Mitch McConnell?

Rescue plan for the US Senate

Acknowledge the gross distortions of representation and distribution of power in the US Senate and deal with them. Six year cycle elections are too infrequent to give lawmakers timely feedback of what the public wants.

Time is of the essence. The more entrenched distortions shift power to rural and low population states, the more difficult Senate distortions will be to resolve.

• Apply Proxy Voting to the US Senate. Each Senator would vote the number of votes they received in their last election.

• Increase every state's delegation to 7 members, all elected at the same time using Single Transferable Vote.

• Include Puerto Rico and Washington D.C.

• Removes one of the primary distortions in how we're governed.

• Moves governance and consistency of policy toward the middle, instead of bipolar shifts.

The Sheeple Approach, something we're good at: Do Nothing.

• Do nothing. Ignore the problem and pretend it isn't there. Let it fester and get worse.

Let Mitch McConnell and the fealty of a minority of Senators (40%), control the flow of legislation passing out of Congress.

Abolish the Most Distorted, Least Representative, Deliberative Body in the World 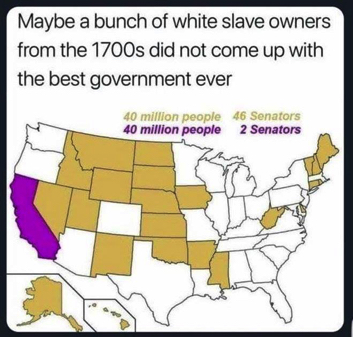